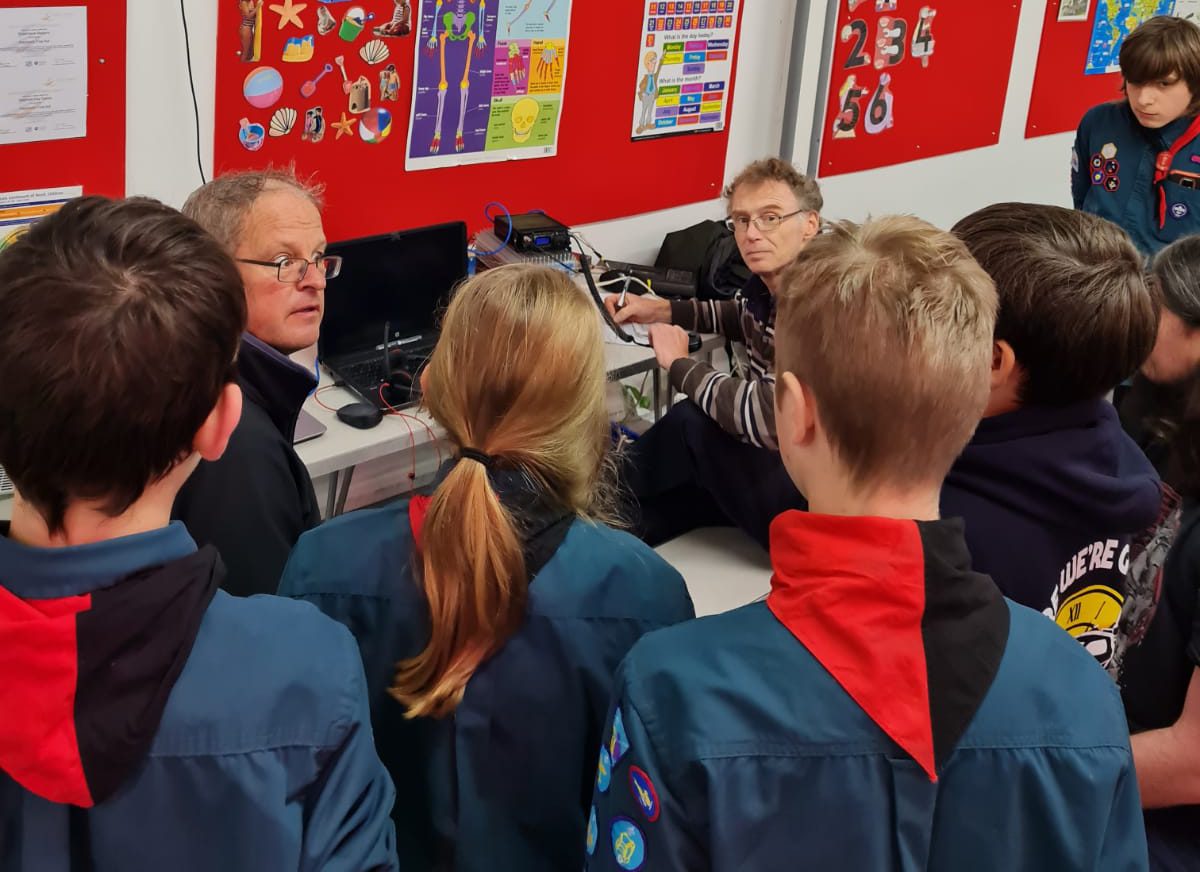 With the help of David Wilde, a tame amateur radio operator from Crawley Amateur Radio Club, and Brendan from 1st Southgate, 7th Crawley took part in the annual Jamboree on The Air on 16th October. This is a chance to make radio contact with Scouts across the globe using amateur radio.   David took care of all the licencing and arranged for a special callsign, GB2CSG,  so that transmission could take place legally.

The first thing to do was set up an aerial, in this case a 40m long off centre fed dipole.  The Scouts built a tripod from pioneering poles and hoisted the centre of the aerial as high as it could go. The ends were strung out across the car park, one hauled high up into a tree and the other on some neat fibre glass poles that David had brought along.

The feed wire from the aerial was passed through a window (once we’d found the key to the window lock) and connected to David’s equipment. Transmission took place on the 80m and 40m wavebands and soon made contact with an operator in Luxembourg. Excellent, international communication had been established and the Scouts were chatting with the bemused person in Luxembourg.

The next contact was also over the water, but didn’t really count as abroad, as it was in the Isle of Wight. Contact was also made with some other places in the UK, such as Swindon and Reading.

Some of the Scouts listened to a famous comedy sketch, Tony Hancock’s “The Radio Ham” and worked out where the scriptwriters had got the science wrong. (Hint: Speed of propagation is frequency x wavelength and radio waves can’t go faster than the speed of light.)

Not content with earthbound communication, an attempt was made at making contacts through the International Space Station repeater using a handheld radio. Brendan waved a simple homemade yagi antenna in the approximate direction of the ISS as it passed over but failed to hear anything.

Later on in the day a 10m mast was put up for a end fed half wave dipole which achieved some contacts from further away on the 20m band  – Kristiansund in Norway,  Stockholm in Sweden and far off Svalbard in the Arctic Ocean amongst others.