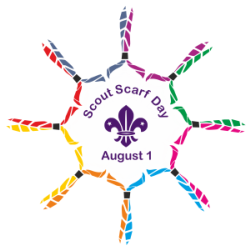 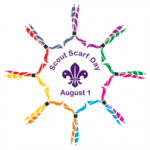 Scouts have several holidays, that help them promote scouting in different countries around the world. World Scout Scarf Day is one of these holidays, that is annually celebrated on the 1st August. Promotion of World Scout Scarf Day began in 2007 by a campaign on Facebook. Every current and former Scout worldwide is encouraged to wear his or her neckerchief in public on August 1, that would be a symbol of the Scout promise and the spirit of Scouting. The date of the event commemorates the very first Scout Camp on Brownsea Island in 1907.

Scout’s scarf, or a neckerchief, is one of the symbols of Scouting. They are a part of Scout’s uniform, that is very practical. For instance, neckerchiefs were chosen, since they can be easily used as a sling or a bandage by a Scout in need.

Scout’s neckerchiefs may have different colors and emblems, that depends on the region, organization, title and sex. Neckerchiefs are tied up by a special knot, that is called the Friendship knot. This decorative knot originates in China and in recent years became very popular among Scouts, that lets omit usage of a woggle.

Don’t forget to use #worldscarfday in your posts, pictures and videos if you want to join in. The latest of these from various social media sites are aggregated below from all over the world!