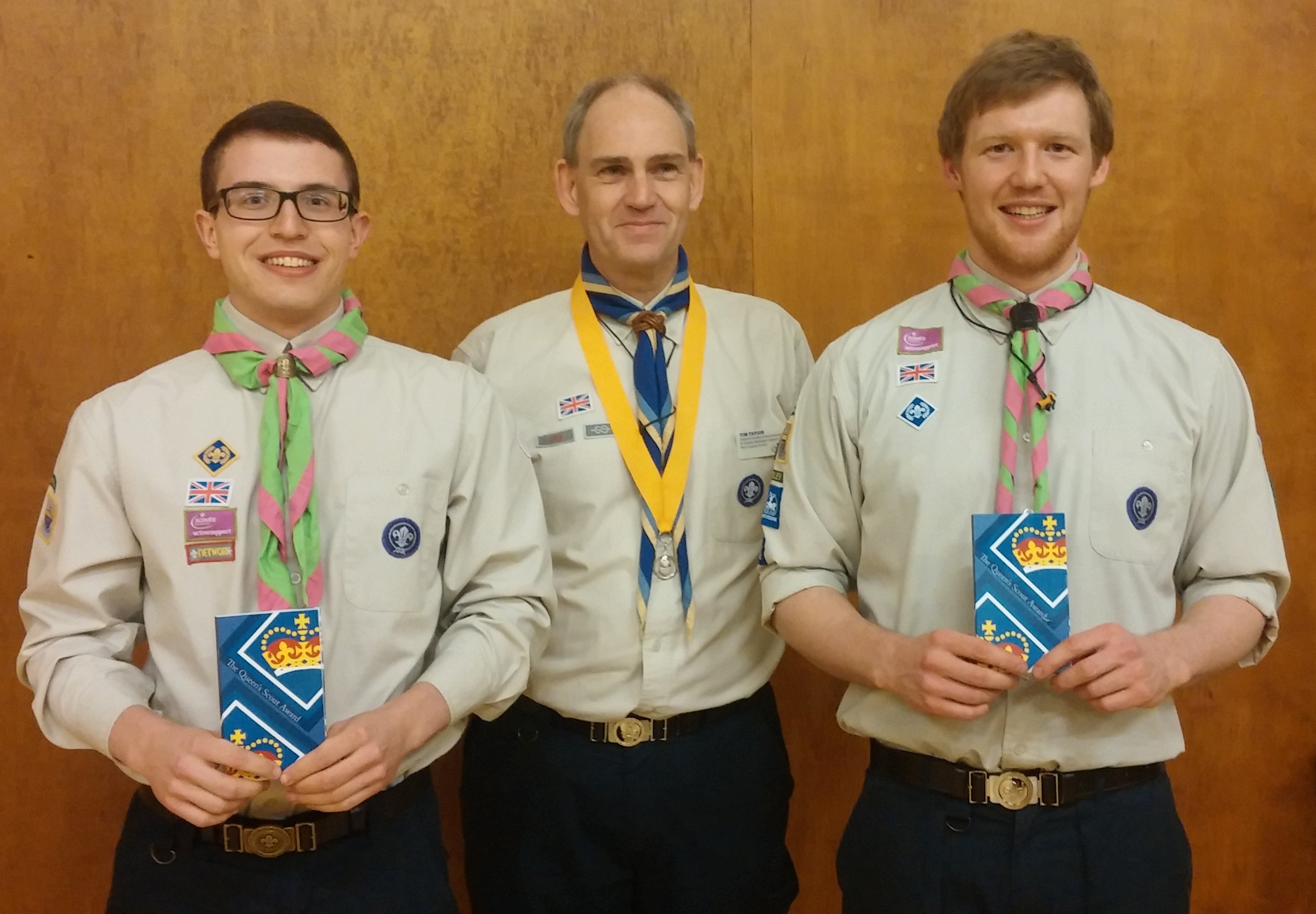 On Friday 27th March Tim Taylor, the Deputy County Commissioner for Scouting in West Sussex presented the Queen’s Scout Award to two scouts from Crawley who had become Queen’s Scouts, the highest training award in the Scout Movement.

In arriving at these both Stuart Graves and Karl Edwards have progressed through the Scout movement from when they joined 2nd Ifield (St Margaret’s) Scout Group as Beaver Scouts at the age of six through to being active members of Drake Explorer Scout Unit and they are now members of Crawley Scout Network Unit. Along the way they have both achieved many awards and completed all stages of the Duke of Edinburgh awards scheme, reaching the Gold Award as a stepping stone to becoming a Queen’s Scout.

As part of their Duke of Edinburgh Gold Award both had to complete at least a year volunteering. Stuart and Karl spent a lot more than just a year helping with the younger sections of scouting putting back into scouting what they had learnt, but also gaining new experiences along the way. Stuart is now a qualified scout leader in Hemel Hempstead and Karl does volunteering work for the Citizens Advise Bureau in Nottingham

One of the many skills that they had started to learn through 2nd Ifield Scouts was kayaking, so they enhanced their paddling skills further as part of their D of E. This skill has carried on and both are competent paddlers of large white-water rivers, having paddled around both the UK and Europe.

They have both spent time away helping with the National Trust working with groups of people they had never met. Stuart spent the week camping up the mountains in the Lake District repairing footpaths.

Both Karl and Stuart completed their Gold Award Expedition together canoeing the Caledonian Canal across Scotland including paddling the length of Loch Ness. The expedition was a four day/three night unsupported canoe trip including wild camping on beaches along the lochs The training was carried out on the River Wye, in Poole harbour, including an overnight camp on Brownsea Island, and a number of safety training days.

In addition to the D of E Gold both Stuart and Karl had to carry out two tasks each to complete their Queen’s Scout award. Both have been on a number of international trips with Scouting, and both spent time looking at personal values including leading a remembrance day service on Dartmoor for Scouts.

Stuart and Karl have achieved these awards but not only completing the requirements but completing them to a very high standard. They are now using all that they have learnt in their lives as well as passing the skills onto the next generation of Scouts.